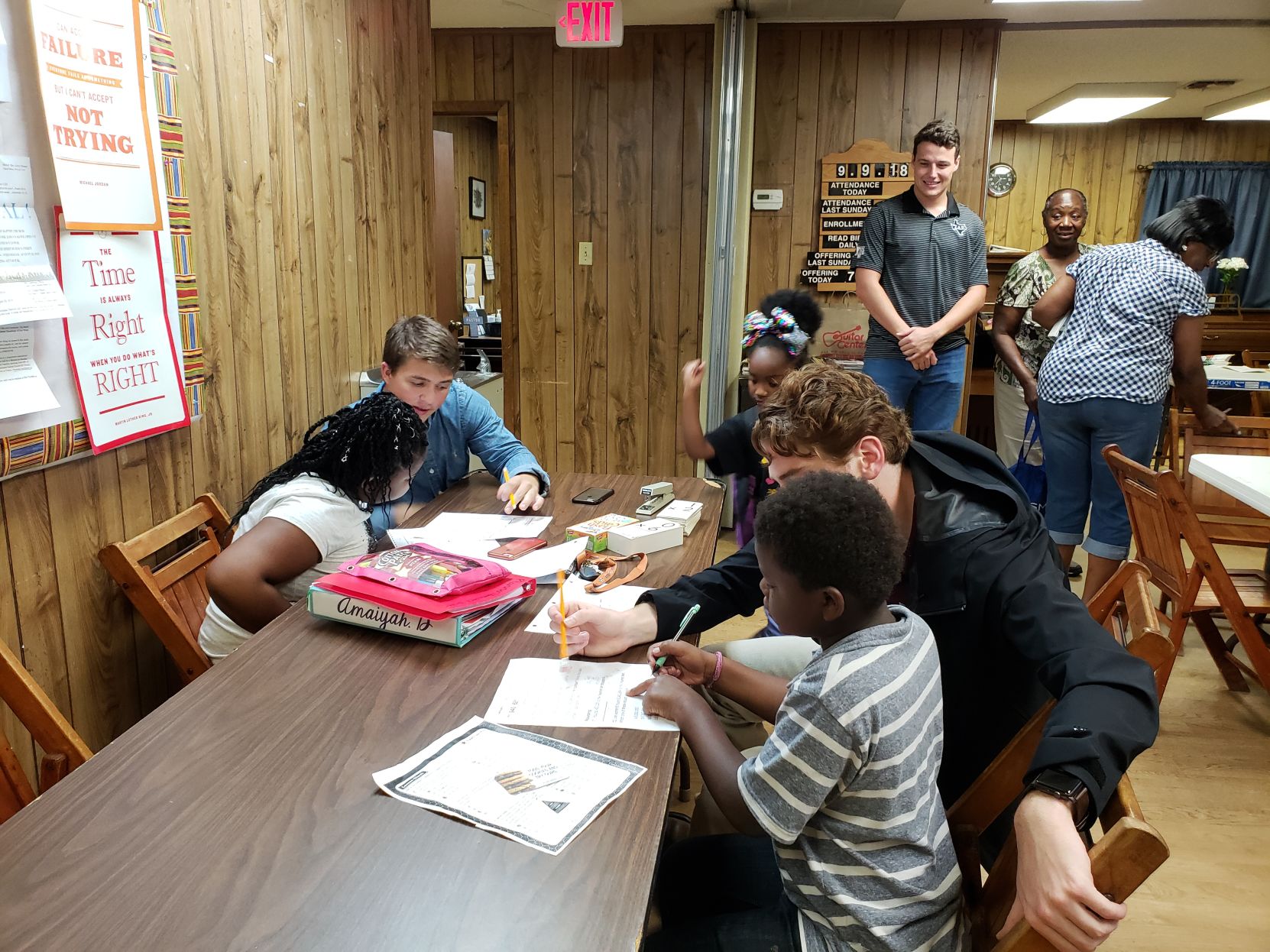 Editor’s Note: This article first appeared on The Battalion written by Shakirat Adetunji. To view the original, click here.

Four Aggie fraternities are giving back to the Bryan-College Station community by tutoring and mentoring local grade school students.

In 2009, a tutoring and mentoring program was created by the president of the Sigma Chi fraternity as a form of community outreach, starting with student members of the College Hill Baptist Church in College Station. Tutoring is free of charge and takes place twice a week during the spring and fall semester. Currently, members of four fraternities — Sigma Chi, Chi Phi, Sigma Alpha Epsilon (SAE) and Phi Delta Theta — contribute their time and efforts to help students grow academically.

Detrick Eaton, director of tutoring service 99 Tutors, introduced the fraternities to the local church. He said the program took off well and has grown tremendously over the past 10 years.

“It’s more than just tutoring,” Eaton said. “It’s young men that take time out of their day to go and provide academic help, mentoring and support to young men and women. There is a bond that’s really developed between getting to know someone from when they are six years old until they graduate high school.”

“It’s a really rewarding experience and it’s been something they all enjoyed,” Eaton said.

There has been a large turnout of both the fraternity members and the students during each session of tutoring. The pastor of the church, Marlon Outing said about 40 to 50 kids have passed through the program, with some of the students moving on to continue their education in prestigious universities across the nation.

“For example, one of the students graduated from Harvard University, went to law school and has just recently passed her bar exams,” Outing said.

Awareness about the program has spread been through announcements in school districts, radio stations and the College Hill Baptist Church’s Facebook page.

Outing said the most important thing is to get the word out about this program and engage more students in Bryan and College Station school districts.

“We want to see that this program continues to grow and provide such free service to all students that need academic help,” Eaton said.

The tutoring and mentoring have been beneficial to all the parties involved, according to sports management senior Armando Martinez, president of Phi Delta Theta. He said his experience in the program is encompassed by the phrase “a rising tide lifts all boats.”

“Taking an hour to help these kids become the best version of themselves is nothing,” Martinez said. “You can’t be the best of yourself until you help everyone around you get better.

David Wuenschel, industrial and systems engineering senior and philanthropy chair for SAE, said he is very lucky to be a part of the program.

“I love to see the look on the kids’ faces when they figure things out themselves,” Wuenschel said. “It makes me feel better, it kind of improves my mental health.”

Chase Carpenter, president of Chi Phi and agricultural economics senior, said he has been tutoring the kids for almost four years.

“It’s a lot better than having to do my homework,” Carpenter said. “These kids need my help and I try my best to help as much as possible. I look forward to coming here all the time, not only because it’s close to the weekend but it’s fun to come here and help out.”

In 2016, a scholarship was created by Sigma Chi and SAE to encourage the students to pursue college education. Two recipients were awarded the scholarship in August 2016 and they went to Blinn College.

In Spring 2017, the Sigma Chi fraternity created another scholarship called the Michael Belt Scholarship, after their advisor. There were also two recipients of this scholarship in August 2017, one student went to Sam Houston State University and the other to University of Houston.

“This has been a vision from the first president at that time and has been carried on by each fraternity president each year with great stride and character, and it’s been very successful,” Eaton said.

Outing said that overall, the students, parents and church are grateful for their connection to the fraternities..

“We all appreciate these guys that come to help the kids,” Outing said. “In return, the church does soul food luncheons and provides home-cooked meals to the fraternities several times a year and during Thanksgiving and Christmas.”