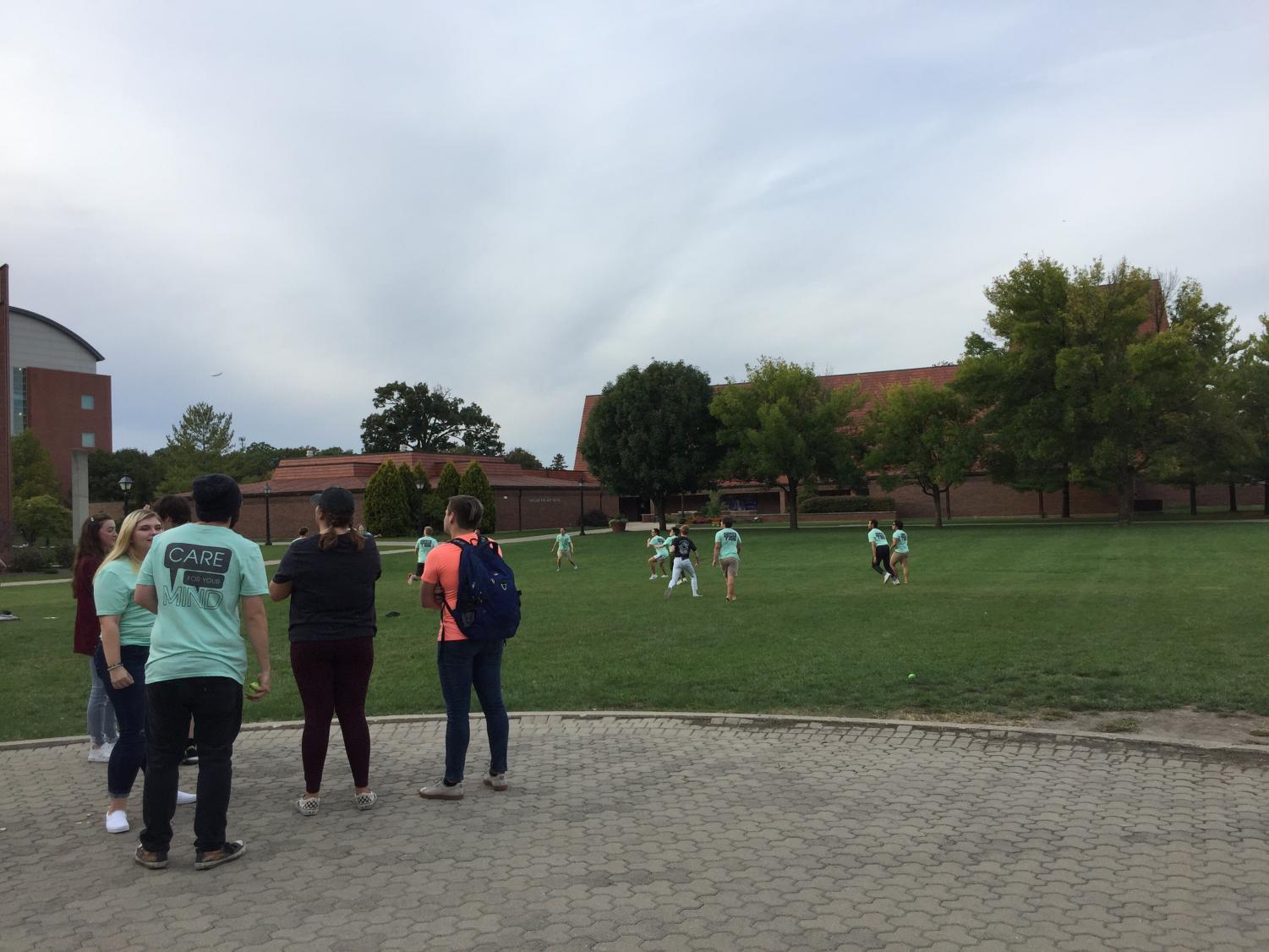 This article by Ronnie Ovando-Gomez originally appeared in The Decaturian. View it HERE.

On Wednesday, Oct. 9th from 4:00pm to 7:00 pm, the “Cookout on the Quad” took place at none other than the Miller Quad. The event was hosted by the Illinois Delta chapter of Sigma Alpha Epsilon, or SAE for short, a social fraternity here on campus.

Many activities were available so there was something for everyone. People could eat food and hang out with SAE members and friends.  They could also play cornhole, chess, and kickball.

The food that was sold were burgers, hot dogs, chips, and snowcones. Each were sold separately, but there was a deal with an unlimited supply of all food items for the price of $5. That being said, the sheer popularity limited the burger supply, as they sold out around 6:07 pm.

Another popular, sold-out item were the green t-shirts that promoted the cookout. Each cost $10, but last year’s blue shirts were being sold for $5 as well. The last green shirt was sold around 5:20 pm.

The cookout’s profits went to the JED Foundation. According to jedfoundation.org, JED is “a nonprofit that protects emotional health and prevents suicide for our nation’s teens and young adults.”

Many SAE members made announcements detailing what the JED foundation’s purpose was. SAE’s chapter president Austin Oberg said that the fraternity’s main or national philanthropy partnership was with the Children’s Miracle Network, but the JED Foundation was another philanthropic partner.

“Last semester, we decided we wanted to partner with them because we felt like [mental health awareness] is important,” Oberg said. “It’s a big deal, and it often gets overlooked.”

The fraternity does have a chapter house, located across from Shilling Hall, next to the Department of Athletics building and nearby New Hall 4. Oberg explained why the cookout was done on campus as opposed to the SAE house, illustrating his intentions to shift the perspective of said house.

“Not every event is a recruitment event, and [clarifying that] is a harder thing to accomplish when all of our events are just at our house,” Oberg said.

He brought up the debate of hosting events on Millikin’s campus versus hosting events at the chapter’s house, asking if solely having house events was better or worse.

“I think it’s totally better to have it here [on campus] and then people can come and see us and it ends up being more successful,” Oberg said.

Oberg also mentioned the profits of last semester’s event, which totaled over $500.

According to the World Health Organization’s website, WMHD’s purpose is “raising awareness of mental health issues around the world and mobilizing efforts in support of mental health.” WMHD is Oct. 10 each year.

Millikin’s Greek Week, which celebrated and promoted all of the university’s social sororities and fraternities by having various events each day, went from Monday, Oct. 7th until Friday, the 11th.

Many Greek life members showed their support for SAE by attending the cookout.

“I would tell anybody and everybody that they should at least go and give Greek life a try,” said Oberg. “I was one of those people who didn’t want to come out, didn’t want to come to rush week. And then I was like, ‘Yeah, sure. I’ll do it.’ And then I found my home. And these are friends that I’m going to have for the rest of my life…I think a lot of people just kind of overlook it because of stigma…and on Millikin’s campus especially, all of that is completely wrong.”