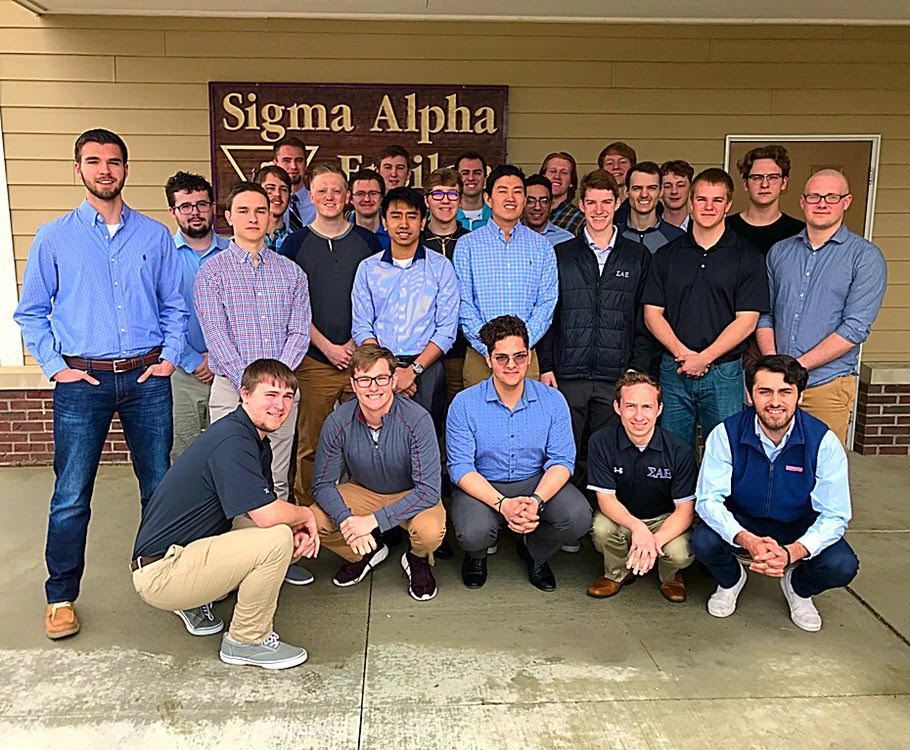 This article by Danielle Sons first appeared in The Collegian. View the original article HERE.

An old vending machine, unplugged from the outlet, sits in the corner of the Sigma Alpha Epsilon (SAE) house’s basement.

The vending machine started a fire in the old SAE house in 2010, but the machine and the fraternity still stand, though now in a new place.

The fraternity’s “True Gentleman” creed is displayed proudly above the mantelpiece on wood salvaged from the original Sigma Alpha Epsilon (SAE). It represents the values SAE has always stood and strived for in the many years since it has been a fraternity.

A level of respect is demanded from not only SAE’s members but, also from everyone visiting the house. One of those demands might go against the grain of other fraternities.

“We don’t call ourselves a frat, we prefer fraternity, just because when people hear frat it has a tendency to have negative stigmas attached to it,” current SAE president and junior precision agriculture major Logan Held said. “We expect our members to go to all of their classes and get good grades as well as come back here, be a good friend and work toward all of our goals.”

Established in 1968, SAE has been recruiting a healthy amount of new members every year. A total of 36 members make up the current chapter.

“The SAE mission statement is to hold each other to the highest standard of friendship, scholarship and leadership throughout our life,” Held said.

Each member is required to do 20 hours of community service per semester, as well as maintain a minimum GPA of 2.5 to remain in the fraternity.

As far as fundraising goes, there are a couple different activities and events the chapter does to raise money.

“We do a lot of stadium and basketball stand clean-ups. We also host dry dances that we invite students to,” junior nursing major Alex Nemecek said.

Every chapter has a philanthropy that they focus on, and SAE’s is Children’s Miracle Network (CMN).

“Every year we try to do a couple fundraisers for CMN and give them all the money we make. We also do State A Thon every year, which is twelve hours of dancing to raise money for kids with diseases,” sophomore communication major, Sam Billion said.

Nemecek elaborated on more of the alumni based fundraisers SAE holds.

“During Hobo Day we have a big alumni dinner and we do some awards for them. In the springs we do Congress Day which is a more formal dinner,” Nemecek said. “Two guys get a $700 dollar scholarship and the two freshmen with the highest GPA get a $500 and a $300 scholarship.”

Joining SAE was not a split-second decision for all of its members.

“My first thought was, ‘I am not joining a fraternity, that’s not my style.’ Then after I went to an opening event and came back the SAE table the next day at The Union, every guy that I met had remembered my name. And so I came around and I joined,” Billion said.

Coming to SDSU as a transfer student, Helds was eager to make new friends and connections, but was unsure about whether or not a fraternity would be the right fit for him. It didn’t take him long to come to a decision, though.

“The first time I came to a meeting it shocked me how professional it was, because when you think of a fraternity you think of partying and the house being trashed all the time, but that was not the case, so that was my draw to join. My draw to stay was all of the instant-friendships I made,” Held said.

SAE also stands to be a fraternity that can mold future generations of boys into men.

For fun, the fraternity gets together all the time, either for bonfires, game nights or movie binge sessions.

“I mean, we are all kind of nerds, deep down, and a few of us that live in the house have all purchased Nintendo Switches. Almost every night you can find guys that want to come down and play Super Smash Bros together,” Billion said.

“This is a place that everyone becomes family when you join, and with the business aspect of it, there is a lot of alumni around the country that provide a big network for members in getting internships and jobs,” Nemenec said.