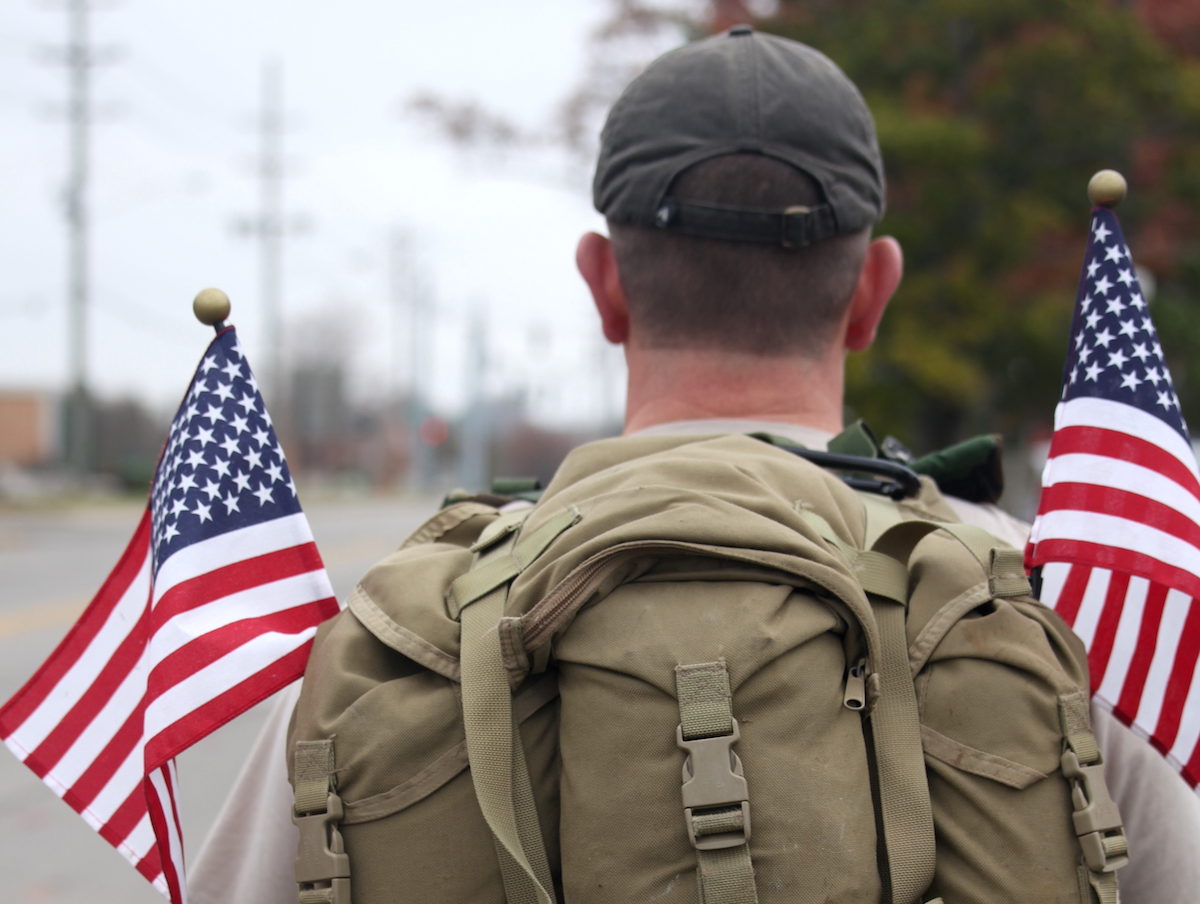 Walking along U.S. Highway 60 as it winds through the Bluegrass State, Capt. Nate Tingle (Morehead State ’97) didn’t expect to earn so much attention from the communities along his route. People drove back and forth on the road looking for him. Others joined him to walk for a mile or two. Veterans came out to share their stories and remember their brothers in arms. The reason why Tingle decided to walk nearly 140 miles from Louisville to Morehead, though, is worthy of attention because of his humble purpose.

Tingle, who grew up in Morehead, decided to join Sigma Alpha Epsilon at Morehead State University because he had a lot of friends who happened to be part of the chapter. Becoming a brother seemed like a natural fit because, he says, they already had a connection, and accepting a bid simply solidified the bond they shared.

It was in the Kentucky Gamma chapter that Tingle also rekindled his friendship with Chief Special Warfare Officer Collin Thomas (’97). They knew each other in high school — even had many of the same friends. Then, as they embarked on their collegiate career, they soon found out they’d be brothers in Sigma Alpha Epsilon. Tingle recalls that Thomas possessed the traits of a natural-born leader, a man who stood out in any crowd.

“Collin was a man of character,” Tingle says. “He knew what he wanted, and knew he wanted more out of life, which led him to break out of his shell. He had internal motivation, and he was easily admired by everyone.”

Thomas set his sights on joining the Navy and, more specifically, wanted to earn the title of SEAL. Through his unwavering determination, he chased after his dream and succeeded. Similarly, Tingle wanted to serve his country and to be part of something bigger than himself. He enlisted in the Air National Guard in 2005, serving as a Senior Airman, and then received a commission in 2008. Just as his brother and friend had done, Tingle became part of a brotherhood within the brotherhood known as Special Ops — as a member of the 123rdSpecial Tactics Squadron and Pararescue Flight Commander.

“Special Ops is a small family and community,” Tingle says, “And you feel a bond, regardless of your service branch. We all work together in some way and often serve as part of the same missions.” But Tingle says that being assigned to Special Ops also means he feels the pain when tragedy happens elsewhere or when it happens in another unit or squadron. “You know what they’ve been through, and you understand what they’re feeling.

And sadly, in August 2010, that pain of losing a brother hit Tingle and others in Morehead when they received news from overseas. Thomas had been on a mission with fellow Navy SEALs in eastern Afghanistan. One of the men on his mission was injured, and he exposed himself to enemy fire to take care of his comrade. During the ambush, however, Thomas was injured fatally trying to protect another man’s life.

As time passed, Tingle felt a desire to do something to honor Thomas’ life and to raise awareness for the losses that military families can suffer. “I couldn’t put my finger on what I wanted to do,” he says. “But there are very few men and women in Special Ops who come out of Morehead. Collin served in an honorable capacity, and I needed to select something that would be a fitting tribute to him.”

Then Tingle landed on an idea that he thought would fit the bill. The Special Operations Warrior Foundation seeks to provide a college education to every child who has lost a parent serving in the Army, Navy, Air Force and Marine Corps during an operational or training mission under the U.S. Special Operations Command. And since its founding, the organization has provided more than $1.8 million to wounded special-operations personnel.

Tingle set a goal to raise $10,000 for the charity by establishing an event called Ruck for Collin. And in order to inspire people to donate for the worthy cause, Tingle decided he would walk from Louisville, where he lives and where his squadron is located, to Morehead, where both he and Thomas went to school. Moreover, his walk would end at the Eagle Trace Golf Course in time for the 2014 Collin Thomas Golf Scramble, another event that raised money to honor Thomas’ life.

Tingle would load his 45-pound rucksack on his back for the walk and chose U.S. 60 for his route — also fitting since Thomas had used the road to train for his Basic Underwater Demolition/SEAL training, or BUD/S, as it’s called.

“I wanted to pick something that would challenge me physically and mentally because it would be worthy of Collin’s achievements,” he says. “I didn’t want to do anything I knew I could do.”

The week of his journey arrived, and he started out quietly and humbly on the path ahead of him.

He began the walk on a Monday evening from Flanagan’s Ale House, a location he chose because the restaurant is the last place he saw Thomas. “He had been back in Kentucky, and we randomly ran into each other,” Tingle says. “That’s what great about SAE. We can go our separate ways, but the connection we share is always there. You have a common experience and camaraderie, and you know never know when it’s going to pop up.”

Although Tingle did some minimal training in preparation for the walk, he started off too fast the first day, walking 36 miles in just over 12 hours. But he adjusted his plan and pressed on his journey, realizing that his endurance paled in comparison to what some people face. “If things were going wrong or if my legs were hurting, I told myself I should be glad it’s just my leg hurting,” Tingle recalls. “Collin’s not here to feel that type of pain, so I used him as motivation. You have to make some personal sacrifice in the matter.”

He would start his day at about 4 a.m., walk for several hours, take short breaks for rest and meals and continue walking until 11 p.m. or midnight. In order to keep on target, Tingle had to average 30 miles per day.

Along the way, he learned a few things aside from physical endurance, too. “Walking is a lot of quiet time to think and contemplate,” he says. “And I was surprised at how many people came out to join me.” In fact, Tingle’s story gained attention quickly on the news and with social media as word spread. People would look for him along U.S. 60, stopping to offer him money for the charity, snacks, Gatorade and even a place at their homes for him to rest at night. In addition, veterans stopped to make a contribution and to share emotional stories about their friends and brothers in arms who lost their lives.

Touched by the outpouring of support, Tingle not only met his goal for Ruck for Collin, he exceeded it.

But perhaps one of the most poignant moments during the trek came at the very end, just four-and-a-half days from the start. Thomas’ sister, Meghan, joined Tingle for the last few miles of his journey as he entered Morehead and approached the golf course. Moreover, she brought with her an American flag that her brother took with him when he was deployed with his SEALs team, and she and Tingle carried the flag proudly as they finished the journey together. For those few miles, they shared some emotional memories of the man they both knew and understood even further what Thomas meant to so many people in his life.

Although the story of Collin Thomas is unique, Tingle says, there are many stories that are similar to his that have affected people in some way, especially the lives of our service members’ families and friends. “It’s been 14 years of war, and the stories don’t always make front-page news or headlines,” he says. “But I want people to remember and learn what is going on in our military world.” And Tingle offers the same advice he mentioned when he spoke at the golf tournament at the end of his hundred-mile journey.

“If you want to honor Collin and honor our military, get out of your comfort zone. He had to get out his comfort zone to become a SEAL,” he says. “Whether it’s your personal or professional life, take that chance. If you want to live life to the fullest, reach outside every once in awhile. You may be surprised what you can achieve.”

To donate to Ruck for Collin to honor Thomas’ life, and to help ensure college scholarships for the children of fallen Special-Operations warriors, visit www.FirstGiving.com. Simply enter “Ruck for Collin” in the search field at the top, and you will be taken to the page created just for our brother and Navy SEAL Collin Thomas. You can click on the “Give Now” button at the top of the page.