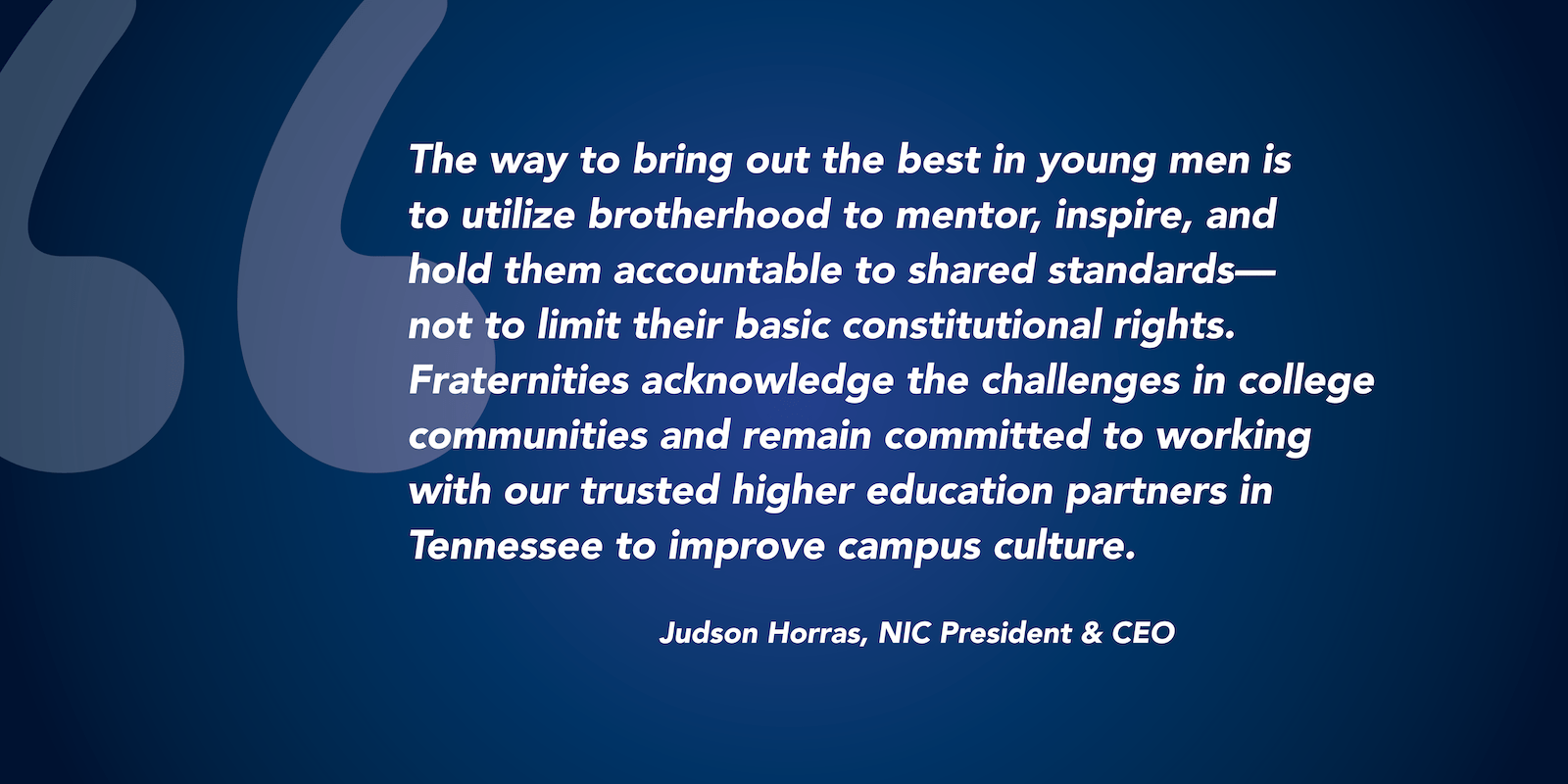 Joint Statement from Represented Interfraternal Organizations
“One million undergraduate students and 10 million alumni have found great value through their fraternities and sororities—including tens of thousands of students at Tennessee universities, which provide opportunities for personal growth, foster local hands-on service and philanthropic contributions, and build communities of support for young men and women.

While colleges and universities are facing critical challenges, fraternities and sororities are actively partnering with campuses to implement measures to enhance health and safety, and we invite true collaboration and dialogue with public officials as we focus on solutions.

Representative DeBerry’s legislation would sever the partnership between Tennessee colleges and universities and the fraternities and sororities on their campuses. It is a misguided approach that has not only failed to garner a Senate companion, but won’t solve deeply-rooted campus culture issues and would likely make them worse. Together, as interfraternal organizations, we call on Rep. DeBerry to withdraw his bill, which if implemented, would have a chilling effect on a student’s basic constitutional rights of freedom of expression and association.”

Dani Weatherford, Executive Director of the National Panhellenic Conference
“From leading programs to combat sexual violence to volunteering as mentors to empower future female leaders, sorority women are consistently among the most active members of our campus communities. They’re committed students at the forefront of some of the most pressing challenges facing women today. This disappointing and short-sighted piece of legislation not only attacks basic student rights, but turns a blind eye to the contributions made by more than 10,000 sorority women on 16 campuses and by thousands of sorority alumnae in countless communities across the Volunteer State.”

Francisco Lugo, President of the National Association of Latino Fraternal Organizations
“Our organizations provide a powerful experience for underrepresented students on campuses. Allowing this legislation to move forward would greatly impact the ability for state schools to continue to provide a diverse, inclusive and equitable environment on their campuses.”

Vigor Lam, Vice Chair of the National APIDA Panhellenic Association
“NAPA believes in the mission and values of our association and the fraternal experience. With the past 2016 House bill proposing to divert UT’s diversity funding, our organizations are more important than ever to advocate for and to be a strong voice for the Asian American identity and issues, as well as the fraternity and sorority experience.”

Victoria Valdez, President of the National Multicultural Greek Council
“Multicultural fraternities and sororities like those in the National Multicultural Greek Council are integral to the lives of the students who find safety and community in their organizations, particularly those who face the daily trauma of existing as students of color or other underrepresented communities. We stand firmly against hazing, but believe banning Greek-letter organizations and their activities will hurt those students, who are committed to the promotion of multiculturalism, scholarship, leadership, diversity, and advocating for justice on their campus and in their communities. It would also push hazing and other dangerous behaviors underground, potentially harming those it seeks to protect.”

Judson Horras, President & CEO of the North-American Interfraternity Conference
“The way to bring out the best in young men is to utilize brotherhood to mentor, inspire, and hold them accountable to shared standards—not to limit their basic constitutional rights. Fraternities acknowledge the challenges in college communities and remain committed to working with our trusted higher education partners in Tennessee to improve campus culture.”

Lynda Wiley, Executive Director of the Association of Fraternity/Sorority Advisors
“Prohibiting public universities from recognizing fraternities and sororities does a huge disservice to the overwhelming number of students that have a positive membership experience. Doing so does not solve systemic problems of alcohol abuse, sexual assault or hazing that occur within the college community or broader society. On the contrary, strong university recognition, which includes employing trained professionals that work with fraternities and sororities, is key in educating students and preventing problems from occurring in the first place.”