Editor’s Note: The virtual awards show video (above) was produced and published by the North American Interfraternity Conference.

The North American Interfraternity Conference (NIC) annually recognizes excellence in the fraternal experience by conferring Awards of Distinction to individuals and groups who exemplify leadership, service, and fraternal values. The award categories recognize outstanding undergraduate fraternity men, chapters, councils, and advisors. These honors play a significant role in the advancement of the fraternal industry by recognizing the value and impact of individual and group efforts and conveying the importance of innovation, courage, and commitment to a positive fraternal experience.

The NIC represents 60 international men’s fraternities, including SAE, which comprises of nearly 6,000 chapters and roughly 250,000 undergraduates. Sigma Alpha Epsilon was named in three of the 2020 NIC Awards of Distinction and Laurel Wreath Awards, the most of any organization this year. SAE is extremely proud of our members for exemplifying the positive impact that True Gentleman can have. We also congratulate the other award recipients and will continue to support and stand with our fellow NIC member fraternities in advancing the efforts of the interfraternal community.

Undergraduate Award of Distinction
Seeks to recognize fraternity men who have found in their experience an outlet for developing as both a leader and a better man. The recipients are those who embody the values of their fraternity and expect the same from those with whom they associate.

Chapter Award of Distinction
Recognizes undergraduate chapters that function well, seek to educate others about the benefits of values-based fraternity experience, and work to maintain a healthy relationship with the inter/national organization.
Laurel Wreath Award
Presented to individuals or groups in recognition of their unique programs, community outreach, or influence within the fraternal world. 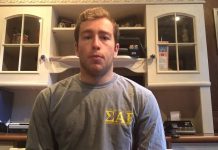