On Veterans Day, Sigma Alpha Epsilon honors all those who have served in our nation’s Armed Forces.

We take particular pride in the exemplary service of our fellow Brothers who are military veterans. SAE has a long history of supporting our military, which in fact led to the construction of the Levere Memorial Temple. William C. Levere (Northwestern 1898) was so moved by his experience volunteering overseas in World War I that he envisioned a building dedicated to SAE members who gave their lives in defense of the nation.

Dedicated as a war memorial on December 28, 1930, Levere Memorial Temple honors SAE members who served their country in the armed forces and hosts memorials containing the names of Brothers killed or missing in action. It also features busts lining the balcony, each representing men who served in the three wars (Civil War, World War I, Spanish-American War) between the founding of the Fraternity and the construction of the Temple. Monuments to those lost in more recent conflicts have been added through the years, including World War II, the Korean War, the Vietnam War, and the Persian Gulf War.

Inspired by a Department of Veterans Affairs report on the lack of proper health care for veterans, Steve Stein (Northern Illinois ‘09) wrote, produced, and directed a short film, “Lives on the Line.” It highlights some of the struggles military veterans face and hopes to raise awareness and inspire conversations about how we treat veterans. Warning: The film deals with difficult topics such as suicide, which some viewers may find disturbing. It is intended for mature audiences. Viewer discretion is advised.

Stein is an award-winning filmmaker from Chicago with a career rooted in advocacy storytelling. In his mid-twenties, he learned how stories can make a difference by informing people and inspiring change. Stein continues to direct, write, and produce tv commercials and social campaigns. 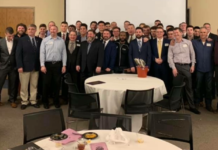