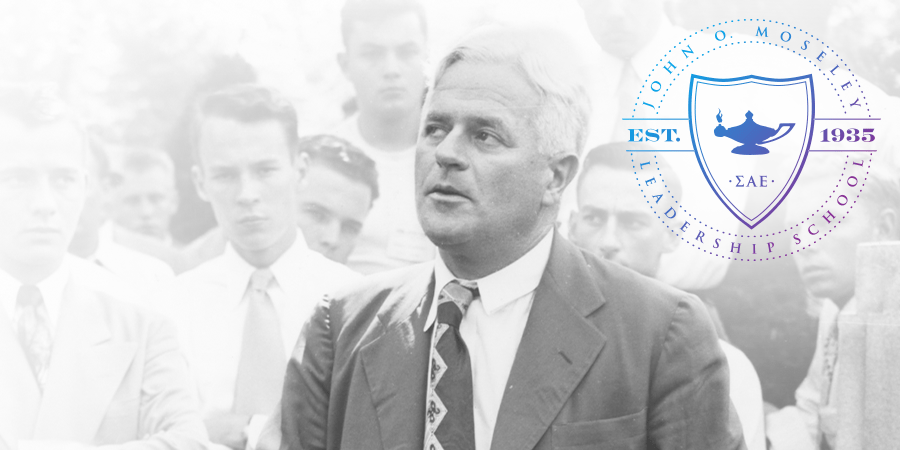 Though we may take it for granted now, Leadership School had been dismissed as a lofty idea that was unrealistic during the Great Depression. But as you will read, Moseley took a chance—and silenced his critics when he did.

At a time when Americans still hadn’t gotten back on their feet from a life-altering event called Black Tuesday, John O. Moseley conjured up a vision of hope. He didn’t take criticism well, and he wouldn’t take no for an answer as he pitched the idea for what he called the Summer Camp and School of Instruction. “But, John, we’re in a depression,” so the story goes. Still, John O. figured if he was going to break through the barrier of “can’t do’s,” he’d have to put his reputation on the line. “We have here a schoolhouse,” he said to Fraternity leaders. “Why not have a school?”

At a time when Americans still hadn’t gotten back on their feet from a life-altering event called Black Tuesday, John O. Moseley conjured up a vision of hope. He didn’t take criticism well, and he wouldn’t take no for an answer as he pitched the idea for what he called the Summer Camp and School of Instruction.

Nearly 60 alumni living in Oklahoma City, all of whom were close personal friends of the Eminent Supreme Archon John O. Moseley, get credit for having made possible the 1935 School of Instruction for Sigma Alpha Epsilon.

The Oklahoma alumni had heard Moseley talk of his dream of holding such a gathering of chapter leaders, which would be devoted entirely to the discussion of chapter-management problems and the exchanging of ideas and experiences with regard to solutions. So on the evening of January 21, 1935, when the alumni gathered at the University Club of Oklahoma in Oklahoma City to honor the election of Moseley to ESA, it was only natural that his dream should come up for discussion with steps promptly taken to make it a reality.

Moseley believed that funds could be provided to pay for the cost of four men from each of the 12 provinces, especially if they lodged at the Illinois Psi-Omega house. Individuals would only be required to cover their own travel expenses. When Moseley gave his estimate of the cost of underwriting the school, the alumni subscribed $275 in five minutes, headed by a subscription of $50 from Ben Allen Ames. Eventually, the men subscribed a total of $355 toward the fund, enough to pay for the selected undergraduates from each province.

Province Mu Archon Charles Barker secured housing for the delegates. The Illinois Psi-Omega chapter enthusiastically agreed to host this revolutionary program. Then, Barker made negotiations with Northwestern University to house and feed the rest of the delegation. Attendees stayed at Goodrich Hall with furnished meals at the Goodrich Grill for $9.50 per man from Sunday through Friday. The first school of instruction included 116 undergraduates from 76 chapters.

Many of the delegates attended seminars based on scholarships, tuition gifts and donations from alumni. Every section of the country was represented with undergraduates coming from as far away as Maine, Florida, Washington and California. The alumni faculty consisted of the Supreme Council, two Past ESAs, three province officers and two chapter advisers. Furthermore, the curriculum included inspirational speakers and roundtable discussions, with numerous informal gatherings addressing the current issues at hand. Titles of the seminars included “Minerva and College,” “Material for Use in The Record,” and the “Meaning of the Ritual.” Men enjoyed the social gatherings, which included swimming in Lake Michigan and softball.

At the closing banquet on Friday night, the attendees passed a resolution making the event an annual affair for the Fraternity.

In the years that followed, Sigma Alpha Epsilon found a formula that worked. Delegates arrived in Evanston on Sunday, stayed either at the Illinois Psi-Omega house or in other university housing, attended various sessions on specific topics and enjoyed each other’s companionship during breaks and downtime. Then, the school culminated on Friday. The first Leadership Schools took place much later than they would now, normally in late August or early September. A big part of the social aspect focused on either competitive sports or a dance. In those days, much like Convention, the Fraternity often arranged for brothers to meet blind dates, and women would show up in droves for such events. Moseley believed in helping the young men prepare for the experience, evidenced in his letters. For example, he wrote, “The wardrobe required will be distinctly informal, with perhaps a suit of white or white trousers for party wear. Every member is urged to bring a bathing suit, for the swimming in Lake Michigan is especially fine and will be the best form of relaxation. Also, everyone should bring his own Kodak.”

By the time the 16th Leadership School arrived in 1950, planners made a new announcement: The school would take place in two sessions to accommodate an ever-growing attendance. In fact, most alumni would remember the two-session model from their own experience. During the years when the event took place over two weeks, faculty and staff needed to channel constant high energy and received little rest. After the first session ended, faculty members would sleep all day Saturday and do laundry. Then, they’d start all over again on Sunday, re-energized for the next group.

By 1972 and the 38th Leadership School, however, leaders and planners realized the two-session school needed to be reconfigured. Lower attendance and increasingly challenging schedules led them to consolidate the school back into one event, which remains the case today. Furthermore, it would be challenging for faculty members to commit two full weeks to Leadership School, which would require them to be away from their jobs and families. Many alumni already selflessly sacrifice four or five days of personal vacation to serve on the faculty.

By the 50th anniversary, Leadership School graduated more than 20,000 brothers. Attendance fluctuated in the second half of the 20th century, but the school’s popularity never let up. The next change wouldn’t come until 1996. That year, Sigma Alpha Epsilon outgrew its accommodations in Evanston and specifically with Northwestern. Therefore, the Leadership School moved into the heart of the city via the University of Illinois Chicago Circle Campus, or UIC. The school kept its heritage in programming and curriculum, just as it had for decades in Evanston. Instead of being scattered in various buildings and walking from one end of campus to another, delegates enjoyed a more enclosed environment at UIC.

During that same time, on the last day of the school, the entire congregation took chartered buses up Lake Shore Drive. Destination: the Levere Memorial Temple. Just as undergraduates stood in awe at their national shrine in 1935, they unloaded from the buses at the building’s doorstep, snapping photos and stepping back for a moment to take in the view. They walked through the various rooms and grabbed scrapbooks and files, ducking into a corner to comb through memories of their chapter’s past. No school would have been complete with the lasting tradition of a group photo. Brothers would bear the heat in suits while hundreds of men lined up, one at a time, on narrow risers in the Temple’s backyard. Much like the schools of the 1930s and 1940s, Leadership School ended with a prominent final banquet, usually at a downtown hotel, complete with a grand meal and an awards presentation.

Sigma Alpha Epsilon’s leaders, as well as the Leadership School planning committee, charted a much different path by 2003. While undergraduates enjoyed what both Evanston and Chicago had to offer for the first six decades of the school, planners decided to take the annual event in a new direction.

Their vision was to make the Leadership School more professional and more distinguished and to move it out of the city and into a retreat setting. Instead of drawing hundreds of brothers who may or may not have participated in the school for the right reason, the goal was to recruit those brothers who wanted an intense leadership-training experience and who would abstain from alcohol during the event.

That summer, the school’s branding changed to reflect this paradigm shift, and the Leadership School took place at the Q Center, a compound used by former Andersen Consulting, in the nearby suburb of St. Charles, Illinois. At the Q Center, delegates roomed by themselves, followed more strict dress codes and participated in rigorous days full of activity. The school maintained the staples of chapter meetings led by faculty members, general sessions on various topics, entertainment, a Model Initiation Ceremony and a trip to the Levere Memorial Temple. But in addition, planners incorporated a good amount of character education alongside the Fraternity and chapter education.

After a ground-breaking decision in 2006, The Supreme Council decided to move the John O. Moseley Leadership School from land to sea. With the new setting on board a cruise ship, attendance increased dramatically to some of the highest levels in the School’s history. This new venue was able to provide the same opportunities for brotherhood, learning and networking, combined with the experience of an oceanic cruise.

To ensure Brothers are receiving the best educational opportunities at Leadership School, the decision was made to bring the program back to land. Since 2017, Phoenix, Arizona, has been the home of the school. Delegates continue to explore their leadership abilities, learn new skills and interact with collegiate and alumni members from around the Realm. In addition to an incredible lineup of speakers and leadership programming tailored specifically for Sigma Alpha Epsilon, all delegates can take advantage of the various resort facilities.

The history of the school is just like the mythical symbol of our Fraternity and the name of our host city – it IS like the Phoenix. Ever growing, ever changing, meeting the needs of the organization as they are in that era. Leadership School reminds us, that just like in our chapters and in life, nothing is forever in its current form. Everything grows and changes, or else faces stagnation.

Each year following the Leadership School, Moseley received a flood of letters from graduates. Their letters often contained similar phrases, such as, “…an experience I shall never forget,” “…the most glorious week of my life…” or “SAE means so much more to me.” Moseley felt positive that if the school could reach just one member in the chapter, the Fraternity could combat his perception of life as a fraternity man.

Believe it or not, when each school ends, and when our members part ways, many of them feel a little sad. That feeling is not the result of any negative experience or lack of education. It is just the opposite, in fact. Attendees pushed themselves non-stop for days, soaking up the experience like a sponge and seeing what a great fraternal experience Sigma Alpha Epsilon offers. For some, the event is the only time when they experience the true meaning of brotherhood. They leave with their heads full of knowledge, ideas and zeal. We believe, just as Moseley did, that if the Leadership School can reach out to just one man in each chapter, it accomplished its goal and provided a foundation to build leadership for the future.