The Fraternity has 345,000+ initiated members; only 149 have been recognized with the Distinguished Service Award. Gary L. Garnand (Idaho ‘70) is one of the most recent recipients, which was presented to him during the 165th Anniversary Convention of Sigma Alpha Epsilon in Des Moines, Iowa on July 17, 2021. 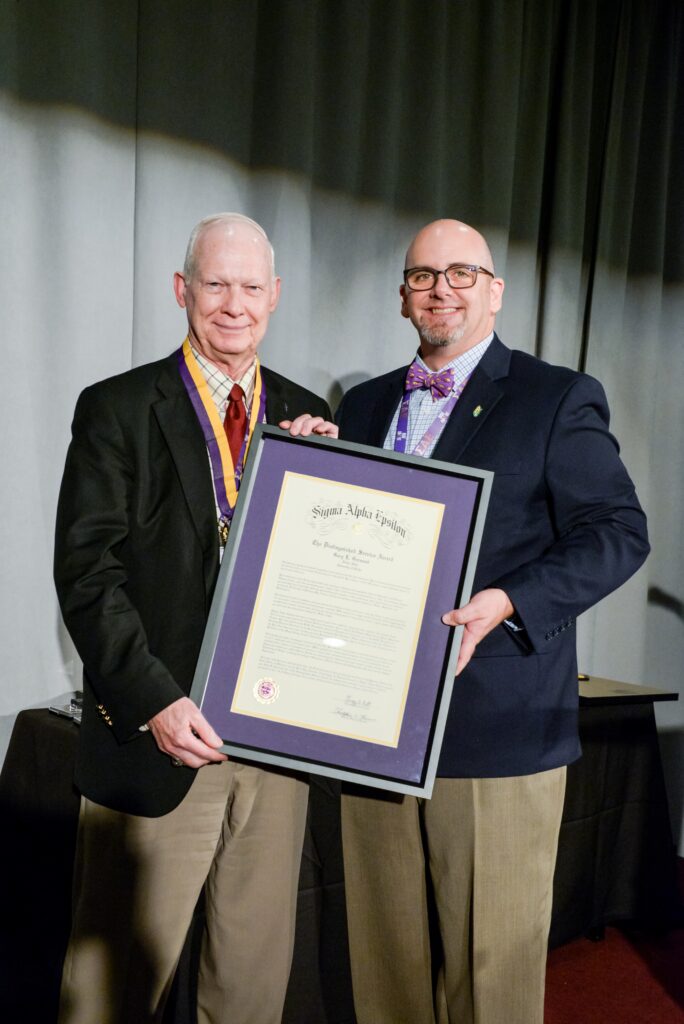 As an undergraduate, Garnand served as Eminent Correspondent, Eminent Recorder, and Eminent Deputy Archon. He also represented the chapter at the 113th Anniversary Convention in 1969 and spearheaded its 50th anniversary. After graduation, he continued serving as Province Phi Archon, leading and guiding collegiate members in Idaho, Montana, and Washington.

Early in your post-graduate life, Garnand made a concerted effort to keep everyone connected. What started as a simple mailed newsletter of life happenings has morphed into a master contact sheet, turning him into the rallying point of every living alumni of your chapter. For decades, Garnand has been the information catalyst for Idaho Alpha.

For four years, Garnand chaired the Alumni Services Committee, then co-chaired the Vietnam Memorial for Levere Memorial Temple. He also served on the SAE Foundation Board of Trustees for four years and on the SAE Financial & Housing Board of Directors as its Secretary and eventually Vice President. The University of Idaho chapter has named him Advisor of the Year three times and until recently, he was President of Idaho Alpha’s House Corporation and currently serves as President of the Magic Valley Alumni Association.

Professionally, Garnand started a fresh produce brokerage business with his father in 1971, which is still in business today. Garnand is involved in a number of chambers of commerce, rotary clubs, investment boards, and real estate development boards. Rotary named him a Paul Harris Fellow an astounding four times and he has also received multiple awards from the University of Idaho, including the College of Business’s Service Award and Distinguished Service from its Athletic Department.

“I didn’t ever think I would have that honor. I’ve been grateful for many things SAE has provided me, but this one was completely off the books,” Garnand said. “At the time, I couldn’t realize and grasp the magnitude of that honor and I’m not sure if I ever will.”

“I guess over the years I’ve always thought it would be great to win, but never expected it to happen. Having Greg Brandt there made it so special. Greg has been an amazing Eminent Supreme Archon. To have him be the ESA and sign that plaque made it very special to me. It makes it more special, and to realize all the SAE’s I’ve known all my life, out of all the amazing SAEs and I’m 149th DSA, it’s an amazing honor.”